How should we think about containing the COVID-19 economic crisis?

3/13/20 – (ZeroHedge, VoxEU.org) The COVID-19 economic crisis is different. It hit the economic giants all at once – the G7 nations and China. And the economic strikes are widely spread, hitting many sectors all at once. It is not a credit crisis, or a banking crisis, or a sudden-stop crisis, or an exchange crisis. Today’s crisis is a bit of all these. Given the transient nature of the underlying medical shock, this column argues that governments should focus on ‘keeping the lights on’ using costly but quick measures to ensure the circular flow of money continues to circulate. The goal should be to reduce the persistence of the crisis and avoid the unnecessary accumulation of ‘economic scar tissue’.

How should we think about containing the COVID-19 economic crisis?

Christmas lights, when I was a kid, were wired in series. If one lightbulb blew, the whole string went dark. My Depression-era parents taught me to fix it by checking each bulb, one-by-one, all one hundred of them. The tree was dark for a long time. But since bulbs were expensive and labour was cheap back then, the prolonged darkness was worth it.

Today, I would do it differently. I would tend towards a ‘costly but quick’ option, say, replacing all bulbs at once. After all, goods are cheap, labour is expensive, and Christmas is short.

I suggest that policymakers think about the ‘economic medicine’ for the COVID-19 crisis in the same way.

This economic crisis is different

Economic crises are like buses; there’s always another one coming along (IMF 2020). But this one is different. And it is different in two main ways.

1. The underlying shock has hit all the G7 nations and China at the same time.

Unlike the Asian or Global Crisis, the COVID-19 economic crisis did not start (economically) in one or two nations and then spread to many others. The medical shock, as measured by the number of new cases, started in China in late 2019. But it was only a matter of a few days before cases showed up in some G7 nations. By 31 January 2020, every G7 nation had at least one case.

2. The medical shock is striking the economy at multiple sites.

To organise thinking about what we should do, we need to ‘simplify to clarify’ when it comes to the nature of the economic shocks that the virus has sparked. Three facets are key (Baldwin and Weder di Mauro 2020).

Strike sites: Where are the three types of shocks striking the economy?

The COVID-19 crisis has struck the economic ‘machine’ in several places at the same time, as Figure 1 illustrates schematically. 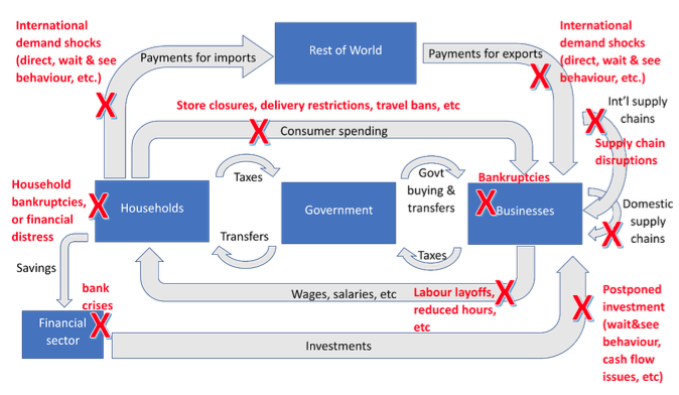 The figure displays a version of the well-known circular money flow diagram (e.g. Mankiw 2010). In simplified form, households own capital and labour, which they sell to businesses, who use it to make things that households then buy with the money businesses gave them, thereby completing the circuit and keeping the economy ticking over.

The key point is that the economy continues running only when the money keeps flowing around the circuit. Roughly speaking, a flow-disruption anywhere causes a slowdown everywhere. The diagram here adds in a few more complications by allowing for a government and foreigners. It also separates consumption expenditure and investment expenditure.

The red crosses show where the three types of shocks can, or are, disrupting the flow of money – the economic dynamo, as it were. Starting from the far left and moving clockwise:

Households who don’t get paid may experience financial distress or even bankruptcy – especially in the US where medical bills are a major source of people going broke (Debt.org 2020).

This reduces spending on goods, and thus the flow of money from households to the government and firms.

The domestic demand shocks hit the nation’s imports and thus the flow of money to foreigners.

This doesn’t directly hit domestic demand, but it dampens foreign incomes and thus spending on the nation’s exports. This can slash the flow of money into the nation that used to be coming from export sales. In the 2008-09 Global Crisis, these two strike zones were particularly important leading to what came to be known as the Great Trade Collapse (Baldwin 2009, Bems et al 2012).

The drop in demand and/or direct supply shocks can lead to a disruption in international and domestic supply chains.

Both lead to further reduction in output – especially in the manufacturing sectors. The hit to manufacturing can be exaggerated by the wait-and-see behaviour of people and firms. Manufacturing is especially vulnerable since many manufactured goods are postpone-able – things you can wait for without huge costs for at least a few weeks or months.

Many businesses have loaded up on debt in recent years (BIS 2019), so they may be vulnerable to reductions in the cashflow. The bankruptcy of the British airline Flybe is a classic example. This sort of shutting down of firms creates further disruptions in the flow of money. Creditors don’t get paid, often workers don’t get paid fully, and in any case become unemployed. To the extent that the firms that go under are suppliers to or buyers from other firms, the bankruptcy of one can put other firms in danger. This sort of chain-reaction bankruptcy has been seen, for example, in the construction industry during housing crises.

This is the last but perhaps most obvious of the strike zones. When workers lose their jobs – even when they have unemployment insurance or other income support – they tend to cut back spending on less necessary, more postpone-able items. The precautionary motives may be less evident for workers who keep their jobs but are taking leave, but as mentioned, this sort of leave is not recompensed in all G7 nations, or not for very long.

What should governments do?

The basic principle should be: keep the lights on. The COVID-19 crisis was sparked by a medical shock that will dissipate. It does not seem to be an especially deadly pandemic, so although many will die and each death is a tragedy, it is not like the plague where the workforce will be reduced significantly on a permanent basis. The key is to reduce the accumulation of ‘economic scar tissue’ – reduce the number of unnecessary personal and corporate bankruptcies, make sure people have money to keep spending even if they are not working. A side benefit of this would be to subsidise the sort of self-quarantine that is needed to flatten the epidemiologic curve.

There are already a number of excellent plans posted. My favourite, by Benassy-Quéré et al., was posted on VoxEU.org on Wednesday.

Authored by Richard Baldwin via VoxEU.org,