Is there a connection to this poisoning of the soil and end-times prophecy? 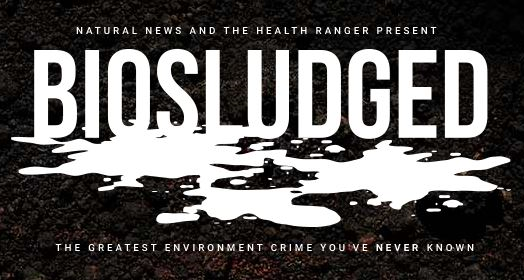 Yes, you read that right.

Mike Adams, anointed to expose deception in the health industry and environment, has just released a new documentary, BIOSLUDGED. This one-h0ur film reveals critical information that we all need to know. We must stand against this but also take steps to protect our health.

Here are a few quotes and points from this important documentary:

As I was watching the film, I was reminded of the scripture Revelation 6:8:

I looked, and behold, an ashen horse; and he who sat on it had the name Death; and Hades was following with him. Authority was given to them over a fourth of the earth, to kill with sword and with famine and with pestilence and by the wild beasts of the earth.

Death, is the word thanatos, which means physical or spiritual death.

The word usually translated as pale or ashen is the Greek word, chlōros, which actually means pale green, a color of death.

This passage tells us that after the 4th seal is broken, 25% of human kind will be killed by four things:

Just before that passage, the 3rd seal in Revelation 6:6 includes:  And I heard something like a voice in the center of the four living creatures saying, “A measure of wheat for a denarius, and three measures of barley for a denarius; and do not damage the oil and the wine.”

Then in 2 Kings 7:1 Elisha prophesied, Then Elisha said, “Listen to the word of the LORD; thus says the LORD, ‘Tomorrow about this time a measure of fine flour will be sold for a shekel, and two measures of barley for a shekel, in the gate of Samaria.'”

Do you spot the similarity? So, in 2 Kings, its 1 measure of flour for a shekel and 2 measures of barley for a shekel, and in Revelation 6, it’s 1 measure of flour for a denarius and 3 measures of barley for a denarius. And, since God’s patterns repeat, there is something we can learn from this story with Elisha that may help us gain some understanding of Revelation 6.

An officer of the King did not believe Elisha. It did not end well for him.

That day, the word of the Lord, spoken by Elisha, came true. Food was sold in the city gate. The people were frantic to get to the barley and flour. Hundreds rushed to the city gate and the army officer who scoffed at Elisha’s word was trampled to death in the crush of people. God said, “Look, you scoffers, wonder and perish, for I am going to do something in your days that you would never believe, even if someone  told you”. (Habakkuk 1:5)

This biosludge issue, or a result of it, certainly seems to be a possible candidate for this type of widespread death referred to as pestilence or plague.

We have so destroyed the beautiful world G_d gave us. Christians should be the best stewards of the planet, better than anyone else. Yet, that is sadly not the case. And, at this point, how are we able to turn around the Deep State/NWO coven’s plan that has long described the destruction of G_d’s creation and torment of the humans that he loves so much?

We may not be able to stop their plan but it is possible we could delay it. If we were to work together, it is possible. But, we can’t work together when the majority of the Christian church refuses to acknowledge what is in front of our faces, refuses to even discuss the book of Revelation, refuses to walk in repentance and forgiveness, refuses to talk about sin, final judgement, hell, or the massive exit of young people abandoning Christianity for Wicca and paganism.

G_d does not take pleasure in this suffering. It is the fruit born of the sin that exploded into being when humans believed the lie of the Lord of Darkness, betraying the loving Creator. The scripture does not tell us that they were terrified by the dark-being’s presence which suggests that it’s possible that he “masqueraded as an angel of light” (2 Cor 11:14) or something innocuous as he usually does. He slithers words that sound good, that make sense to a carnal mind. His words coax rebellion and selfishness to life if they aren’t immediately put down and bound by the blood of the Lamb of G_d.

This original sin has always had, to me, a feeling of violence, like the poor soul who agreed to meet up with Jeffrey Dahmer, and reminds me of Matthew 11:12, “and the violent take it by force.”

The forces of darkness inspire devolution, suffering, grief. Yeshua, the foretold Messiah, the one and only Son of G_d, brings life, power, victory, freedom, and supernatural shalom!

Look at another article that just came out:

BBC just published, Why the world is becoming more allergic to food.

The ecosystem of our world is in severe distress:

21that the creation itself also will be set free from its slavery to corruption into the freedom of the glory of the children of God. 22For we know that the whole creation groans and suffers the pains of childbirth together until now. –Romans 8:21-22

And, this problem of biosludge, that hasn’t yet come close to its apex, is coordinated with all of the other disturbing trends:

As these pixels on the screen are drawn closer and closer together, and as we can see on the horizon the destination of each of the tracks converge in a great destructive crescendo, we are seeing a rise in dark supernatural power.

The dark side wants to destroy and pervert all of G_d’s creation; most especially human beings. If you don’t think the biosludge issue is related to this article’s focus of end times prophecy, you’re missing pieces of the puzzle.

Demonic worship includes using body fluids and feces in their rituals. Remember the scandalous revelation about the Clinton’s and the Podesta’s relationship with occult practices and the dark princes of spirit cooking, Marina Abromovic? Her videos showed the foul “paint” she used on walls and on objects. It is a sign of the demonic to wipe or draw using feces on the wall. We are clearly in the end of days.

The Lord of Darkness and his minions are saturating our world with human feces peddled under the lie of fertilizer, having employed humanity to do their profane work.

Our world house is being defiled. As deceived human beings celebrate and engage in all things demonic and spread feces on the walls our our planet home, it has become a grand demonic ritual that summons the dark lords from the abyss, leading us all to the final battle.

Read Russ Dizdar: The global rise in Satanism & the occult

Humanity is getting sicker, and all of the prophetic scriptures in the bible continue to pop onto the screen before our eyes.

If you don’t know Yeshua as your L_rd and savior, please visit the Who Is Yeshua Jesus? page and meet the love of your life. He is knocking on the door of your heart and he wants to alert you to what is happening. You need his help to navigate this spiritual mine field.

If Yeshua Jesus already sits on the throne of your heart, press into him and intercede for our country and our world. Walk in constant repentance. Ask for the L_rd to forgive the sins of our country and the world. Ask for an increase in discernment so that you will not be deceived when the heavy deception reaches full swing (Matthew 24:4).

The game is on. I feel today as if the L_rd is telling us, “Watch very carefully.” Watch the signs; the L_rd is showing us what’s going on and that his word is true. He doesn’t want you to be caught unaware.

“Therefore be on the alert, for you do not know which day your Lord is coming.” –Matthew 24:42

Please help us to continue this end-times ministry by supporting our sponsors, and,

Join me and some of my friends for a time of intercessory prayer every Tuesday night at 8pm eastern time.

Ultimately, we know who wins: The Lion of the Tribe of Judah! The G_d who answers by fire! The foretold Messiah, Yeshua HaMashiach!