“The illegal we do immediately; the unconstitutional takes a little longer,” Henry Kissinger

11/16/18 – In the recent history of the United States of America, we have never had traditional war on our soil. We have never been rounded up and tortured or put into concentration camps. Sadly, Japanese Americans were put in camps during WW2. But since then, there has not been anything close to that experience on a wide scale, for Americans on American soil.

Because history has not been taught in schools over the past 20 years, many of those under age 30 don’t have a clue what it took for this country to be formed, what the early Americans endured before they left their former countries. They experienced horrific events through tyrannical systems. The founders of our nation’s government drew on that knowledge because it was still fresh in the nations consciousness when they wrote the Declaration of Independence, the Constitution of the United States, and the Bill of Rights.

The Conventions of a number of the States, having at the time of their adopting the Constitution, expressed a desire, in order to prevent misconstruction or abuse of its powers, that further declaratory and restrictive clauses should be added: And as extending the ground of public confidence in the Government, will best ensure the beneficent ends of its institution.

We live on a planet that is in a fallen state, fallen from the perfection that G_d created because mankind chose to believe another being who only lied.

Man is not innately good. And as such, there will never in this life be a perfect government, nation, people, or person. Wherever humans gather power, the weeds of corruption flourish unless they are kept in check by both the Word of G_d and the presence of the Holy Spirit.

This is a fact that is easily seen as a commonality through all of human history. And that is just one reason why the founding documents were written they way that they were.

Though all of us would readily agree that the United States is not perfect, we must keep perspective and remind ourselves that no human government ever will be perfect in this reality! Only G_d is perfect and only his governance is perfect.

With this in mind, we must not be led by the vicious Deception that says, if there is an imperfection, then tear it down! All of it! That Deception does not tell you, just as the serpent in the garden did not tell the first humans, what comes after: utter destruction, death, and subjugation. Just as the millions of humans before you, the new “government” you create will not be better than what the US now offers.

Yes, without doubt, there has been tremendous corruption and manipulation of our nation’s strength, the most notable and recent example is the Clinton cabal. They have been responsible for a list of crimes that truly boggles the mind, such as the deaths at Benghazi, then barking with irritation, “What difference does it make?” They sold our uranium to Russia, with Mueller’s cooperation and assistance, and then birthed with their own money and connections, a complete lie that president Trump was the one who had made illegal dealings with Russia.

If this is news to you, then you need to understand the Hegelian Dialectic.

That lie, using the ten-dollar word, “dossier”, rather than “memo” or simply, “document”, was meant to distract from enough of the people discovering the facts of their misdeeds and that they most absolutely should be in prison for what they’ve done. It was meant as a diversion tactic, in their mind to delay them having to pay for their crimes, but also to keep the American people divided and having to spend time trying to figure out what was true, while they worked behind the scenes to destroy our entire government and at the same time establish their own security as the ruling class of the globe in the new system they were working so diligently to realize.

Just like the emergency oxygen masks that deploy in airplanes, parents must put their own masks on first in order to be able to assist their children. We must get our country healthy again in order to help other nations and peoples. Right now, our country is in the most dangerous and vulnerable state since the Revolution because this subversion has been going on behind the scenes, working through a war of information, for a very long time.

We’ve been in a war that is not demonstrated on a battlefield with guns and bombs as with wars of the past. This war is about truth, manipulation of public thought, and censorship: information.

So, destroying one of the best governments in all of human history because there may be some flaws, is not constructive, it makes no logical sense, and isn’t even self-serving: it is complete folly. We must preserve all of the good, while we continue the work to change that which is not.

You may have been convinced that joining in the violent terrorism expressed through groups such as Antifa or BLM is cool, is somehow an appropriate exercise to express your thoughts, or that it is fighting for the good of humanity. But, I tell you the truth, global elitists, such as George Soros, have paid many millions of dollars to fund these groups for the very purpose of inciting violence and to bring about division and the ultimate destruction of the United States, all so they can achieve their ultimate goal of a single global government they call the New World Order.

Under this system, there will be only elites and their servants. The film Elysium very clearly represented this goal.

It’s called the Hegelian Dialectic, also referred to as “problem-reaction-solution”. 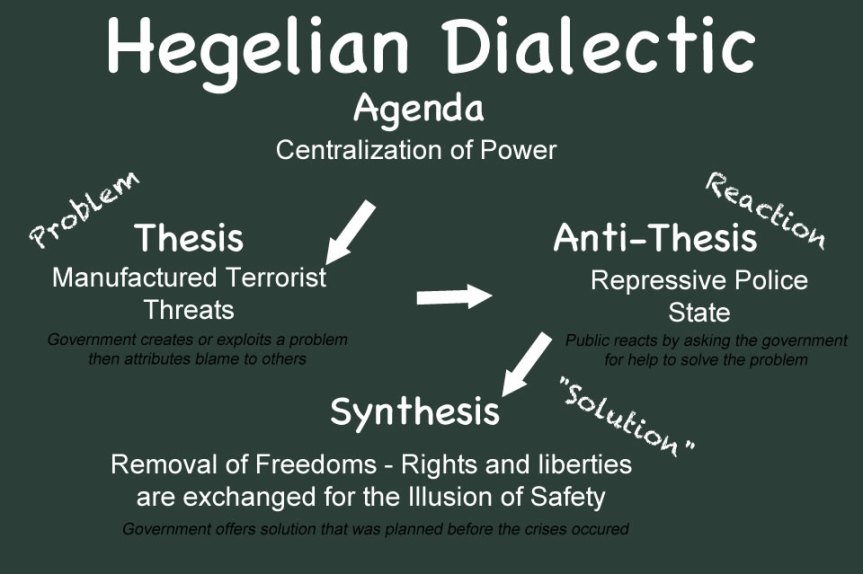 It starts with this: they, the NWO, have a goal. You would never concede to their goal, which is total enslavement of humanity. So over time, they seed the division and create the problems, then they will offer you the “solution”, which was their goal all along, a one world government.

“We cannot expect Americans to jump from capitalism to Communism, but we can assist their elected leaders in giving Americans small doses of socialism until they suddenly awake to find they have Communism.”
-Soviet Leader Nikita Khrushchev, 1959 (from a German newspaper, 1920s)

This is where we are today. The light has been turned down very slowly, like a sunset on an age of humanity, so that we didn’t notice how dark it had gotten until it was very late in the process.

The NWO has played us. We must admit this. We must stop and check the information we are being given. It is no coincidence that 93% of all MsM coverage of President Trump is negative. That’s called, Propaganda. 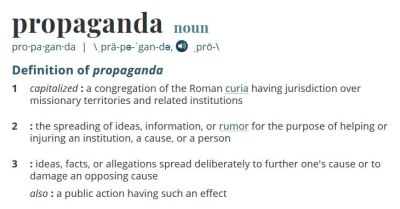 For the youngsters out there, once upon a time, CNN was pretty much down the middle. The fledgling network covered news — real news, not fake news — and worked hard to be on site wherever news was happening. When something happened, that was the place to go.

But those days are long gone. Watch any 10 minutes of CNN, and now you’ll see nothing more than a nonstop — and often vicious — diatribe against President Trump.

Under the lead of former NBC head Jeff Zucker, CNN has become a far-left network that harangues the right and praises the left, almost nonstop. “News” is secondary. Now it’s all about pushing an agenda and toeing the line for the liberal overlords.

A great example of this is a revealing comedy clip Conan O’Brien put out in 2013. It’s still powerful and haunting.

They have done this to divide us! We are not as divided as this corrupt media says we are! They are seeding and feeding contention that boils and errupts. But for every person who listens to those lies and lets it sink into their spirit, it becomes their world view and then guides all of their thinking and decision making.

I urge you to pray. Ask G_d to reveal the truth to you. If you ask sincerely, wanting to know the truth, he will answer you. This is part of the end times deception meant to lead humanity to ruin, like lambs to the slaughter.

With G_d’s help, we can wake up and take back the territory the enemy has stolen.

Please join me and some intercessors around the country in prayer every Tuesday night at 8pm Eastern Standard Time. We can make a difference if we stand fast and don’t give up.

Please Share and Like this article. We need to spread the word in love and pray for the deception to be broken.