Leland Ingham Keyser has rejected the allegations made by Judge Kavanaugh’s accuser.

9/23/18 – (National Review) In written testimony sent to the Senate Judiciary Committee, a third named witness has rejected the allegations made by Judge Kavanaugh’s accuser. Having been asked by a Senate staffer to comment on the charges advanced against the nominee, a lawyer for Leland Ingham Keyser wrote:

Simply put, Ms. Keyser does not know Mr. Kavanaugh and she has no recollection of ever being at a party or gathering where he was present, with, or without, Dr. Ford.

Under 18 U.S.C § 1001, letters to the Judiciary Committee are subject to criminal penalty if false.

Ms. Keyer, whom CNN confirms is “a lifelong friend of Ford’s,” is the third named witness to deny any knowledge of the allegations. The other two, Mark Judge and Patrick Smyth, issued written statements to that effect earlier in the week. Thus far, nobody has backed up the account advanced by Kavanaugh’s accuser, while Kavanaugh and three other named witnesses have rejected it outright. 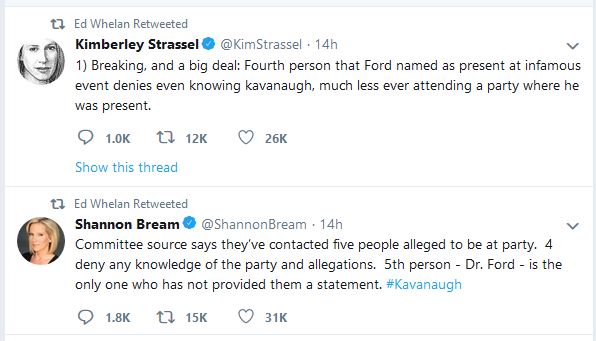