Punishment of citizens with bad “social credit” to include bans on plane or train travel for up to one year with state policy, “Once untrustworthy, always restricted”

3/20/18  When I wrote the article “Did China Just Launch the Mark of the Beast: Mandatory by 2020” back in December of 2015, I knew this was coming, but to see it in the headlines of the UK news outlet The Independent  and  Reuters this past weekend, it was still shocking.

The article titled, China to Ban Citizens With Bad ‘Social Credit’ Rating From Taking Flights or Using Trains for Up To A Year, describes punishments for people who commit “acts like spreading false information about terrorism”.

“China has flagged plans to roll out a system that will allow government bodies to share information on its citizens’ trustworthiness and issue penalties based on a so-called social credit score,” writes Reuters’ staff.

Please read: Did China Just Launch the Mark of the Beast: Mandatory by 2020

Does this sound like a good idea to you? A global control system where a thought that is not approved by the state receives punishments for up to a year…or more?

Neither China nor Communism have not been good to their people. Do you remember Mao? Be very wary of the thought police: Don’t just run from them, you must band together and defeat them in every possible peaceful and legal way. A global government means that you will no longer have any place to run to for safety; there will be no escape once their global chains are finally linked.

The western world has gobbled up technology slickly marketed to make our lives easier even as it walks us further into a foul cage and is even now slowly shutting the door. We give them everything they wanted to enslave us…and we have given it willingly as technology cult devotees shoot each other in WalMart parking lots over new models of some new cell phone or game.

The noose the NWO has around the necks of humanity continues to tighten. We have been given a brief reprieve as many around the world have begun to seriously pray and intercede for our countries and engage in fierce spiritual warfare against the dark powers fueling the creeping, stalking take over. Many have rightly taken a stand against the global government system even though we know it will one day arrive.

The NWO will eventually achieve their goal through effective deception and manipulation made manifest via warfare tools such as social programming. How do we know this? The bible documented it thousands of years ago and it unfolds in astonishing, detailed accuracy before our eyes every day.

The elite will eventually set up their chosen leader with demonic, occult ceremony as individual rights disappear down a slowly, swirling sewage drain as the hypnotized masses cheer the figure head. The masses will rejoice that there are “no more borders” even though the NWO has always had its plans out in the open of global regions. There will be borders, just different borders with different leaders chosen by the elite. The Club of Rome map, around since the 70s, has nearly disappeared from the internet. Here is that map they devised which has 10 nations/regions. Some form of this plan remains in place. 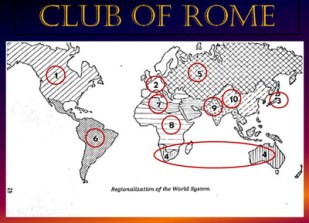 The heart is deceitful above all things, and desperately wicked: who can know it?
-Jeremiah 17:9

This will all end very badly. This is nothing but a bait-and-switch scheme to depopulate the world and separate what remains into masters and servants: just what the NWO has always wanted.

We live in amazing times. This step by China that was part of their announced plan years ago gives a us a glimpse of what is coming, indeed the system is already in place. It’s the first time in human history that all the necessary elements of a global beast tech system are in place and ready to roll out exactly as the book of Revelation describes.

Please read Did China Just Launch the Mark of the Beast: Mandatory by 2020. The article contains very important information on this system and how it works.

If you would like prayer, you can email me at: shofarblast@yahoo.com.

Choose gold and silver for time-tested protection against black swans, debt sinkholes, and a dying dollar