“(We’re) glorifying our fallen state to the point we corrupt ourselves into the image of the beast.”

7/25/17 – (WARNING: There is some graphic content and adult subject matter in some of the attached articles.)

Face Like The Sun ministries put up an important video (above) documenting a disturbing fashion trend of transforming into what appears to be supernatural beasts. Please watch the short video above. We should be taken back by these clips and recognize there are other disturbing connections to this trend.

We’ve seen some examples of misguided souls having surgery to transform into other creatures or to glorify Satan. There is even a new “modeling agency” that specializes in representing people who have changed their bodies in this way. But this trend is sweeping youth culture and has other connections we need to protest.

Some of this “fashion” is coming out of Japan. It so happens that I spent several months working in Japan. I very much enjoyed my time there but I also witnessed some darker elements of the culture. There has, for some time, been an element of Japanese culture that pushed the desire for little girls, women trying to dress like little girls, sound like little girls, comic books sold out in the open on any street corner that are completely pornographic, things like that that I witnessed when I was there. There is clearly a very heavy occult influence.

But this “trend” is new in its public expression of the occult movement, revealed using a tool of their warfare that often gets overlooked by those who educate on spiritual warfare: fashion. It is used by the NWO to pre-program and desensitize the masses through social engineering for coming changes. And, in this case, what would the coming changes be? Clearly the plan is moving further and further toward open Satanism and demon worship. This should be a wake up call for even non-believers of Yeshua Jesus.

This new style trend that transforms followers into beasts with demon horns, calves hooves shoes, and demon masks is already present here in the US. There is a TV show that airs here that pushes this movement. I suspect it will grow in popularity…unless we move to stop it. 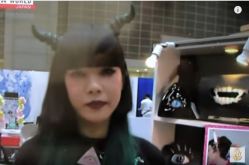 We need to be aware of this; it is a blatant sign of the times. Genesis 6 is shouting from the pages of the Torah. But clearly this trend also removes the boundaries of sex with beasts and children; yes, bestiality and pedophilia.

Can you see the direction we are headed? It is without a doubt pushing the “do as thou wilt” tenant of Satanism. They are saying, go ahead, transform your bodies into beasts and aliens, it’s okay to have sex with beasts and aliens…and children; whatever you want. And, the the conclusion will be, since there is no difference between humans and beasts, cannibalism is fine too. 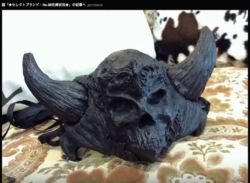 Discover magazine was not the only one to recently publish articles making “The Case for Canniblaism“, in which the author said it is “perfectly natural”.

And, hot on the heals of the “spirit cooking” scandal via nauseating WikiLeaks revelations connecting the Clintons, the Podestas, and Marina Abramovic doing this very thing, we have, right on cue, the music business already pushing this.

Katy Perry, the princess of the underworld (I pray for you regularly, Katy!), recently released a single entitled, Bon Appetit, which is in-your-face cannibalism. She is portrayed as meat, chopped, coated in flour, cooked, had an apple stuffed in her mouth as she is blindfolded and bound, tortured, and served up at a cannibalistic restaurant, all portraying deep occult ceremony.

In her SNL performance of the song, Perry, on the table where she is being served up, even assumes the “arch of hysteria” a la Jeffrey Dahmer (He was a cannibal who positioned at least one of his victims in this position, remember?), which is used in occult ritual. (The Podestas, below, right, own and proudly display the sculpture of “The Arch of Hysteria” among other occult works) The video is deeply disturbing, and, utterly toxic and damaging to youth.

How much you wanna bet the kids in church are singing this song? Like lambs to the slaughter. It is mind control programming in full view.

Believers must come to grips with this. It may be uncomfortable for some of you, but you must open your eyes to what is going on around you and take spiritual and sometimes physical steps to protect your families.

**PLEASE read the outstanding article by Vigilant Citizen on this video and Katy Perry’s use as a slave to the elite.

There is another a good but brief article about the strange and sudden push for cannibalism here but **please be warned, it is graphic.

And what about the recent Salon magazine article that asked for people to understand pedophilia? Salon took the article down but other written responses to the article remain. And the man who submitted the essay, Todd Nickerson, is not a resident of New York City or even South Beach. No, this guy is a graphic designer in Tennessee.

The Spirit clearly says that in later times some will abandon the faith and follow deceiving spirits and things taught by demons.
-1 Timothy 4:1

Sodom and Gomorrah is all around us. As believers, we must push back even harder against the encroaching dark spiritual forces. We must protect children from things like this. We must remember that humans are made in the image of G_d. This is so far down the rabbit hole that I have truly struggled for words as I write this.

This is a call to all believers around the world for prayer and fasting. We have crossed the Rubicon and we aren’t going back. We better fasten our seat belts because, as Rabbi Cahn said well over a year ago, we have passed the tipping point. And when you pass the tipping point, everything speeds up in a fall to the bottom that will be both fast and furious.

For a moment, think back over what has happened in just the past year or two! The immorality and debauchery has swept in like a flood. 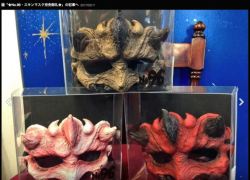 And, unfortunately, there has been very little push back from the Christian church at large. I’m asking all of you to share this article. Start talking about this in your church or synagogue. Western civilization is crumbling just as Rome once disintegrated into a memory. We must get on our knees, repent, pray for mercy, and do all we can to help others to see what’s going on. We need to gather together across denominational lines to form 24 hour prayer groups and occult task forces to both pray for and minister to those trapped in or tempted by the occult as this occult cultural army marches ceaselessly toward our children.

True believers are imbued with power from on high. We have been given the tools to fight back against the Lord of Darkness as he tries to victimize children. It is a sin to watch evil moving in and do nothing; ultimately it is a refusal (= disobedience) to walk in the power and calling so clearly explained to us in the Word.

Regular readers know I work in inner healing and deliverance ministry. Please believe me that this is no joke. This glorifies and empowers the Fallen Cherub. There is a darkness moving across our tiny world like a creeping, bony hand trying to get every human in its grip. This is the cancer of the Gotthard Tunnel ceremony spreading like wildfire across the globe.

As you read this article, did you recognize how many similarities there are to that event? Bestiality, zombie behavior, glorifying Satan, calling him and his minions up from the abyss? Something was unleashed, as I warned in 2016 when I wrote an article on the event.

I posted that article on June 6, 2016 and ever since, there is rarely a day that viewers around the world aren’t reading it and sharing it. It has been viewed literally thousands of times. If you haven’t read it, please do so. You will see connections to what is going on now in this sickening trend toward bestiality, cannibalism, and pedophilia.

Make no mistake, this “trend” is demonic in origin. And as such, ignoring it means we are complicit, which is the equivalent of inviting it to come on in, have a seat in your home, and eat everything in your refrigerator. Legally, they have to be invited in or given an open door. When believers refuse to walk in the calling of spiritual warfare in power, love, and a sound mind, it is an open door to the forces of darkness. If we aren’t defending our territory and beating them back with the sword of the spirit, they will continue to advance.

When Satan pushes in, we are to push back even harder! We serve the victor! We have been given the spiritual weapons and the instructions on how to use them! Satan will lose this battle! Take back the territory from the enemy! Tear down his strongholds! He is seeking to “sift us like wheat” which means grind us to a fine powder, in his charge to battle against G_d himself. And he will not stop until he is ultimately stopped by Yeshua Jesus, the Lion of Judah.

There is an answer to all of this and it is the only answer. It is the only salvation from this ever thickening cesspool of pure evil: it is Yeshua Jesus. His name literally means “salvation”.

If you prayed that, please visit the Who Is Yeshua Jesus? page to learn more about who He is. And, be prepared for G_d to answer you. He loves you more than any human could ever love you. He gave his own life to rescue you from this suffocating sin, darkness, and evil.

Wherever you are on this trembling globe, I have prayed for you. Yeshua Jesus is real, He is the only Son of G_d, He is going to return, and He is knocking on the door of your heart. Read the book of John in the Bible.

Believers, get off the couch, hit your knees, and fast and pray like you’ve never prayed before. Tear down the altars of Ba’al! Repent! We are headed down a very steep hill at breakneck speed. Hitting bottom won’t be pleasant. Pray for guidance, wisdom, discernment, and mercy. The situation in the world could literally change over night. The time is so very short! Start by sharing this article!

Through G_d we shall do valiantly. And it is He who will tread down our adversaries.
-Psalm 60:12

Listen to this and get before the L_rd:

Here are the lyrics to Holy Visitation by Eddie James

Sound the alarm
Awaken the watchmen
Open their ears let their voices be loud
We prophecy, You’ll come to this nation
Touch this generation with a holy visitation

We dance, and we shout and we lift up our voice
Let your kingdom come down