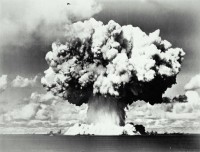 10/5/16 – After US State Department comments that Russian soldiers would go home in body bags and that there could be attacks on Russian cities, Russia conducts the largest nuclear war exercise in history, involving 40 million people.

Russia also stated that there were enough bunkers in Moscow for all of its people.

As international tension builds following attacks in Syria, Russian state officials are preparing terrified citizens for a nuclear war – which they say would be started by America.

Today’s exercise is being run by EMERCOM, Russia’s Emergencies Ministry.

Civil Defence Department director Oleg Manuilov told Interfax: “Training will be held from October 4 to 7 and will be attended by more than 40 million people, more than 200 thousand professionals rescue units and 50 thousand pieces of equipment.”

The push for war is being driven by forces beyond human greed and powermongers; it is driven by a luciferian agenda.

We must pray more than we’ve ever prayed.  I pray that no escalation of war manifests.  But, if war begins its deeper phase (we are already in a third world war, just the softer version of it) I pray that the US does not start it.

To our readers around the world, we all need to pray for each other.

There is only one source of true peace: Yeshua Jesus.  Please visit our Who is Yeshua Jesus? page for more.