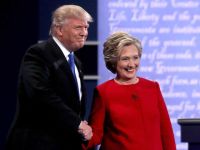 9/27/16 – Yahoo News reports: “A slew of unscientific online snap polls are painting Donald Trump as the winner.  A Time.com poll has the Republican nominee leading Hillary Clinton by four percentage points – 52 percent to 48 percent – after more than 1,300,000 votes were cast.
“Time cautions that its survey, like other such polls, is ‘not statistically representative of likely voters, and are not predictive of the debate outcome will effect the election.’
Instead, these surveys measure which nominee has “the most energized online supporters.”

“Trump took to Twitter to show more dominant leads from polls by conservative news site Breitbart , CNBC and others.

“His biggest lead comes from the results of a Drudge Report survey, where the business mogul garnered 80 percent of the votes. Drudge Report is a popular conservative-leaning news aggregator.

“The debate from Hofstra University in New York was expected to be viewed by as many as 100 million, rivaling the Super Bowl. Among those viewers was President Obama , who, according to a spokesman, would have the debate on “in the background” as he worked late Monday night.”

As for the moderator, Holt interrupted Trump 41 times and Hillary only 7.  Doesn’t seem unbiased to me.

Here are a few of the poll results: 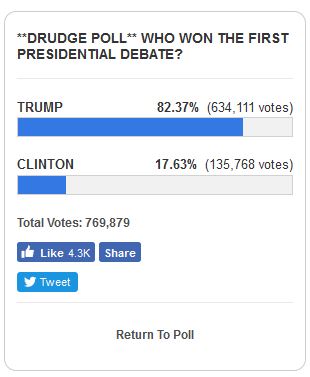 One of the biggest surprises to me, Variety which also showed Trump ahead: 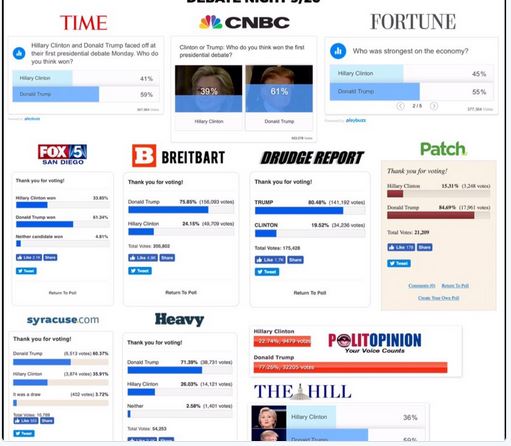 “Trump’s crowning achievement was when he stated that Hillary had been in Washington  for 30 years, so why didn’t she do any of things she’s talking about now. It was a pithy statement and one that he needs to repeat, as I believe it will cause the lightbulb to go off in many voters who are on the side-lines.

“In closing today’s update. If Hillary wins the White House, there will be higher taxes, liberal supreme court judges, mass immigration, abortion on demand everywhere, and essentially she will cement the last disastrous 8 years of the O’Bummer administration.”

And we all must be careful of so called ‘fact checkers’.  I’m surprised how many people still haven’t caught on to just how much they are twisting and lying to present the data they want you to see.  The major old news outlets such as the Washington Times have not been particularly friendly to Mr. Trump, so it was interesting this article was published today:

The next few weeks until voting in November will be packed with events and moments exposing the state propaganda machine.  The clock is ticking and there’s not much time left.  Please continue to pray for the safety of political outsider Trump, and for the safety of the nations since we know historically just how often war is used as a distraction or a path-changer.