Media censorship, lies from the WH, and another compromised crime scene are just the beginning 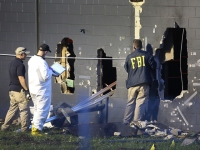 6/15/16 – I’ve waited to post an article on this horrific terrorist shooting because frankly I knew what was coming: collusion and coverups.

In the interest of time I will post a list of important points (below) but there is no possible way I can include all of the references.  I will include many of them but you will have to do further research yourself.  And, since some of these stories and witness accounts are already being scrubbed from the internet you may not long be able to find them.  For that reason I rely heavily on the great reporting of TruNews during the  broadcasts Monday 6/13, Tuesday 6/14, and Wednesday 6/15, and InfoWars.

In summary, I can say that this again appears to be an event that was set up like a false flag event.  It is painfully clear that someone or a group of people continued to give the gunman green lights, remove him from watchlists, and open doors for him.

Will we later find he was working with the CIA or some such alphabet organization as we have so often seen with bloody attacks?

In a time when the US has pushed gay and transgender issues as never before in history, there is a coincidental attack on a gay club by a Muslim ISIL sympathizer, who, it turns out, was leading a double life as a gay man and dealing with a father who was adamantly anti-gay.

Reports from multiple witnesses say there were multiple gunmen not just one; we’ve heard that before.  And, the assailant’s home was left wide open so no evidence can ever be trusted, but does appear to be set as a stage for media piranha fury.  Talk about deja vu!

What are we to make of all of this?  We can’t easily label this as an attack against the homosexual community as the WH and the establishment so quickly did.  At the same time, the same establishment refuses to say the words “radical Islam” which is exactly what it was.  If he was sympathizing with ISIL, he was embracing radical views just as his father who supports the Afghan Taliban!

First and foremost, since I’ve been in the entertainment industry all of my life, I have had many friends who were gay.  To any readers who may be gay, please don’t believe the rhetoric of the gun control advocates and the establishment!  It is Islam that wants to behead you and throw you off buildings, not Christianity!  Islam is horrible to both women and homosexuals.  You must recognize this and fight against this infiltration of Islam that will only torture you in the end!  The establishment is trying to use it to enslave you!

This attack to me seems to have played a much larger though much more subtle role.  It seems to have had multiple objectives, playing on the discrimination they have socially engineered, and to have tested the success of the social engineering i.e. brainwashing techniques used on the American public for decades.  Multiple incidents have been revealed where issues were found with Mateen but witnesses did not report them at the time for fear of being labeled as a racist.  That is the glaring success of the social engineering.

They can move in and do what they want to us because most people will stay silent for no more than a free large pepperoni pizza and 2 quarts of aspartame laced soda.

This seems to be one of the final exercises in a rush to the really big party, the NWO takeover.

They can see that now is the time and that all of the varying tracks of their plan are converging not just about the same time, but in the end of this year, more specifically, around September.

The NWO elite’s Bilderberg just ended, there are occult holidays 6/20, 6/21 and 6/23, the Brexit vote is on the 23rd of this month, and the Satanic Bohemian Grove starting in the end of July?  As Alex Jones has stated, “At the bottom of every rabbit hole we keep finding Satanists.”  They are gathering their power for something the end of this year.  Financial, military, political, religious…ChrIslam is a very real candidate for the new global religion as the Pope continues to push for both one world government and one world religion.

England, get out of the EU now while you can!  Don’t listen to their threats!  You will have no freedom if you do not!  Rip the band-aid off and deal with the consequences and rebuild.  The NWO will crush us all like bugs as they have so clearly stated in their own books, papers, and the Georgia Guide Stones.  It’s just socialism/communism wrapped up shiny paper but in the end is only slavery and oppression.

The engine is running faster and faster and the direction is very bad indeed.  If we don’t stop it, we will plunge off the cliff into global war and chaos that will be neither easily nor quickly corralled.

If we are distracted by more events (transgender bathrooms, another shooting) we can’t focus on eliminating the encroaching threat to our liberty and freedom by the NWO and their sick to-do list.

What is coming is not friendly at all, and it looks more and more like a set up for a war, martial law, and/or Obama staying in for a third term after declaring  some “need” to do so.

Important points of this terror event:

IMAM SAYS, BE COMPASSIONATE FOR HOMOSEXUALS: KILL THEM

Orlando Killer Worked For Company Transporting Illegal Immigrants Inside US; Was Interviewed By FBI 3 Times