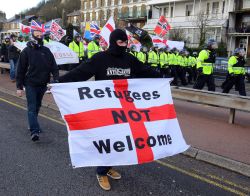 4/3/16 – (BBC)  Clashes erupted between anti-fascist activists and police officers, who stopped them from getting to grips with far-right groups protesting against refugees in Dover on Saturday.

Kent Police “significantly” increased its presence in an attempt to prevent a repeat of January’s clashes.

An EU flag was burned in protest to the union and its policies regarding the migrant crisis.

Eight people were arrested after they left a designated assembly area and blocked the route, police said.