3/29/16 – There is no end to the lying and manipulation that the Establishment will employ in efforts to derail a Trump victory.  Michelle Fields, a former reporter with Breitbart, has filed false charges against Trump campaign manager Corey Lewandowski and today Corey was charged.  The firestorm of claims in the media has begun, starting with Ted Cruz, with shouts of firing a campaign manager charged with battery or assault.

Now we’ll have two more weeks of reporters shouting at Trump that he hasn’t “disavowed” the assault.

What about when the claims are false, Mr. Cruz?

Mark Dice wrote: “Michelle Fields claims that Trump campaign manager Corey Lewandowski ‘aggressively tried to pull me to the ground,’ continue to be proven false as more security surveillance footage has just been released, proving this is a massive hoax being perpetrated by the Never Trump Movement, which consists of Establishment republicans who are using Leftist Saul Alinsky tactics to try to stop Trump at any cost.”

Tyler Durden of ZeroHedge wrote an outstanding article with documents and video on this fraud against the American people. 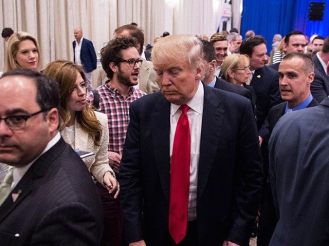 Even Breitbart has an article today in which Secret Service says that Michelle Fields touched Mr. Trump before Lewandowski intervened.  Trump said, “Can I press charges?”

“She crossed in between agents and our protectee after being told not to,” said the agent, who was present that night in Jupiter.

She claims to have received bruises on her forearm, though the video clearly shows he only touched her upper arm to get past her and seemingly to indicate the interview was over.

She didn’t even stumble in her six inch heels, so it’s pretty tough to claim he tried to throw her to the ground.  In fact, she continued, without missing a step, to pursue Trump after she and Lewandowski brushed by each other.  There was no recoiling in pain, no crying out, no loss of balance, no facial expression of complete alarm.  There was no time where she turned around and asked another man who it was who tried to throw her to the ground as her report claimed.

This circus is an embarrassment to the country and makes a mockery of the democratic process in the U.S.

Ms. Fields, you should be ashamed of yourself.  You have no honor.  You are an insult to women everywhere who have suffered true abuse, assault and battery.

If you want to be a reporter in live situations, which requires a certain amount of aggressiveness to stay in the gaggle of reporters trying to get the story, you have to be willing to get moved around a bit in the crowd.  If you can’t take that, why did you sign up for the job?  Let me inform you, that in that situation, you’re not going to get a shiatsu massage and trial size containers of designer shampoo and conditioner.  This is no spa!

Maybe you got a nice little deposit in your account or a “gift” from the Establishment for your work?

We just had a very interesting interview come out today with a Top German Journalist who confessed all of the mainstream media is bought and owned by the CIA.  Are you included in that club, Ms. Fields?  He said they all got paid to “help”.

It would appear Mr. Lewandowski  has grounds for a counter-suit for Defamation of Character in my opinion and frankly I hope he uses his right.

We the people are tired of the manipulation the mainstream media has perpetrated on us and we want the truth to be shouted from the mountain tops!  We want the vote of the people to determine the winner the way it’s supposed to, whoever it may be, and for now in landslide numbers it is to be Trump!  Since you started this, I hope justice is served: that would put you, Ms. Fields, in a very uncomfortable place.

A second view and commentary: