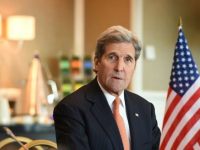 3/17/16 – Well, the White House has finally conceded, via John Kerry, that ISIS is committing genocide against Christians.  But, it was interesting that they sandwiched the word
“Christian” in between others, such as Yezidis and Shiites.

They just can’t get it out without choking, it seems.  Just say it!  “Islamic Terrorists” are killing all the “Christians” they can get their hands on!

“My purpose in appearing before you today is to assert that, in my judgment, Daesh [Arabic acronym for ISIS] is responsible for genocide against groups in areas under its control, including Yezidis, Christians, and Shiite Muslims.

Daesh is genocidal by self-proclamation, by ideology, and by actions — in what it says, what it believes, and what it does. Daesh is also responsible for crimes against humanity and ethnic cleansing directed at these same groups and in some cases also against Sunni Muslims, Kurds, and other minorities.”

And since the US created ISIS that is a bit of a problem, since that fact can always be traced back to them in the future.

Does that keep it stuck in your craw, Mr. Kerry?