Sweden, which has not been at war in over 200 years, will soon be pulled into a European conflict according to internal military documents 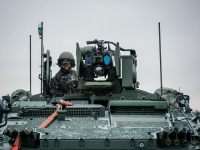 1/26/16 – (Breitbart) Citing the situation in Sweden, the recent decisions of domestic politicians, and global instability, the chief of the Swedish army General Anders Brännström told men under his command they could expect to be fighting a war in Europe against skilled opponents “within a few years”.