1/8/16 – This video is astonishing, and if it is what it appears to be, meaning authentic vs. hoax, it is yet another solid example of phenomena occurring around us that we do not fully understand, at least in the physical sense.

UPDATE 1/9/16:  That’s what I wrote yesterday when this video got traction.  The sources I trust have now labeled this as a hoax.  But, the rest of the information in this article stands regardless, because U.F.O.s are real, burgeoning and not going away.  We have lots of footage that has been vetted by governments  around the world.  So, this is not the last time we will have to vet footage to see if it’s authentic or not; and there will be more footage that is authentic like the Kumbergaz U.F.O., one of the best pieces of film of a U.F.O. in history, which was fully vetted by labs and governments.  If you’d like to see the Kumbergaz footage analyzed you can see that here.

Following is the rest of the article as it was posted dealing with U.F.O.s and the spiritual implications:

The timing of this is interesting and the location is also.  We’ve heard for quite awhile that there are dimensional shifts taking place around CERN and its experiments.  The lab says through its own statements that they are trying to open a portal to another dimension.

The Bible tells us about portals.  In fact, there is a great book by the duo of Horn and Putnam, On the Path of the Immortals, which deals with this very issue.

L.A. Marzulli has been warning for many years that what the Bible refers to as a coming great deception, which would contribute to the great falling away (“Let no one in any way deceive you, for it will not come unless the apostasy (“turning away”; “falling away”) comes first, and the man of lawlessness is revealed, the son of destruction,” – 2 Thess. 2:3), will have to do with U.F.O.s and the power of a large-scale sighting or multiple locations sighting on the public.

Even some secular researchers have reluctantly come to the conclusion that these craft and beings are, in fact, demonic, because the evidence strongly suggests they are.

For years now we have seen a dramatic increase in the number of credible sightings and increasing phenomena world-wide.

Let me ask you, if a mile-wide silver disc appeared floating over your town in broad daylight and beamed down beings, what would you do?  What would be on T.V.?  What would everyone be talking about?

It would change everything for a whole lot of people.  It would be a very great deception.

The correct response when you see something that seems to be of a supernatural nature that you don’t understand?  Rebuke first, ask questions later!

Everyone would be talking about how they are superior to us, that they have visited us before, and this is where life on this planet came from.  Though they never mention that still does NOT answer where life itself came from, it just kicks the can down the road for a moment.  They would only put off that question, “You’re not ready for that knowledge.”  Of course they don’t want to tell you that they are fallen beings and are just trying to deceive you to come along with them!

In late November, we just saw the release of the new Pepsi film, Black Knight Decoded, which was packed full of alien agenda and NWO symbolism and propaganda.  Why did they spend so much money on that and release it at this particular time?  We wrote about it here at ShofarBlast.

They will say things like, “You are finally ready to accept the knowledge we have for you.”

Receiving forbidden knowledge.  Don’t you realize that it exactly what Satan did to Adam and Eve in the first great deception of human beings?  It’s the same song and dance from the same beings!

They will say, “You must give us a sign that you are ready to go to the next level of your development.”

The demonic always ask for permission to enter.

For this reason, I will reprint here L.A. Marzulli’s blog post from today regarding this new U.F.O. video.  He says it better than just about anyone.

“Hello L.A.,
I wanted to share with you a dream my mom had about the coming great deception.  I’m going by memory of what she told me over Christmas break when around the time she had this dream.
She said (she)was at some kind of get together with a large group of people while hanging out in an open field.  She was sitting next to her husband (when) all of a sudden a large craft that took up the whole sky appeared and sat there…for a few minutes then disappeared!  Her husband responded in the dream saying “How can you deny that?!”  Then (she) woke up from the dream.
Ozzie”

I have written about what I have come to call The Coming Great Deception, since the first book of the Nephilim Trilogy.  Week after week the Ancient Alien show, on the History Channel, promulgates the idea that we were visited by extraterrestrials.  The show will point to ancient megalithic structures, like the Great Pyramid or the Herculean stone walls of Sacsayjuaman, in Peru.  They investigate crop circles and of course show what appears to real physical evidence of intruders/aliens coming to earth.  We also showed this in our award wining Watchers 7 film!  Four-fingered hand prints on the wall that fluoresced under UV light and implants that we removed at Seal Lab, in other words real, physical evidence that an outside agency—think fallen angels here—are visiting us and are engaged in nefarious activity.

There is another paradigm or world-view which also addresses the phenomenon.  I say this phrase at the beginning of Acceleration Radio:

…and what about UFOs?  While we may disagree as to where they come from we can agree that they are real, burgeoning and not going away!

We are told in the Biblical Prophetic narrative that there will be a one world religious system.  This begs the question, how in the world are we going to get 7 billion people on this planet to embrace this?

I think this hinges on Darwinism and here’s why.  Darwinism tells us that there is no supernatural, no God of the Bible, no spontaneous creation, from nothing, i.e. ex nihilo.  It creates a void in its adherents and thus never addresses the question, where does life originate from? In Ben Stein’s must-see movie, Expelled, we see Stein sitting down with Darwinist Richard Dawkins.  Stein poses the question, where did the first self-replicating molecule come from.  It is clear that Dawkins doesn’t have a clue, and he’s right when he states that no one else does either. Then, Dawkins launches into a diatribe about how life may have been seeded here.  This is the world-view that is now set in place to accept the coming Strong Delusion that the Bible warns us will come in the last days.

UFOs continue to appear over the skies of the world with impunity.  Pilots report seeing mile wide craft!  What are we to make of this?

This dream that Ozzie wrote in to me about (Please email me your stories  at la@ppsreport.com) is just one of many that I have received over the years.  I call them warning dreams and I would posit that Our Father is sending them to us to warn us of what is coming.

The Great Deception will be just that.  It will change the world-view of many people instantaneously.  In other words, unless a person knows what he or she is looking at priori, they will believe what they see.

A few nights ago a friend of mine who lives in the next canyon over, and whose house is perched about 500 feet above the Pacific Ocean—he has one of the best panoramic ocean views in town—called me and told me he had seen a UFO darting across the night-skies over the water.  He relayed that the craft shot back and forth over and over again and that he was mesmerized as he watched it.

I informed him that he needed to rebuke first and ask questions later.

These intruders and the vehicles they ride in are not going to go away.  We need to understand that the Ancient Alien Crowd, new-agers, channelers like those who contact The Ashtar Command, UFO contactees, and countless others will embrace the deception and in fact are helping to promulgate it.

The video above which appears to show an inter dimensional portal opening if real, is astonishing and should be a wake up call to the church.

We are admonished by Paul that The Fallen Cherub will come: with all sings and lying wonders.

Do we really take to heart these words of warning or do we dismiss them?

Think about it, a little later in this same chapter Paul warns us further when he states: And for this cause God shall send them strong delusion, that they should believe a lie:

What is the truth?  That Yeshua created all things and without him nothing that was made was made.

What is the lie?  That we were created, seeded here by ET.

The Great Deception is Coming folks. The signs are all around us.

All the signs are converging, people.  Get right with Yeshua Jesus right now.

How do you do that?

The time is so very short.  Get ready spiritually, first and foremost.  Then, through deep prayer, prepare with they physical things such as food and water, the best you are able for the coming challenges.  As I say, pray for pre-, plan for post-! 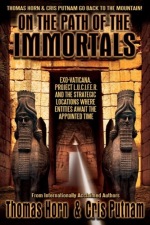